Jennifer Wong’s collection ‘Letters Home’ was recently published by Nine Arches Press. The book “unravels the complexities of being between nations, languages and cultures. Travelling across multiple borders of history and place, these poems examine what it means to be returning home, whether to a location, a country, or to a shared dream or language.” You can buy a copy of the book here: Over to Jennifer,

“In writing this collection, I reflected on my upbringing at a much deeper level than I would normally allow myself to; an unsettling experience in many ways. In writing ‘To my father, who taught me how to fold serviette penguins’, I seek to understand who my father really is. For many years, he worked very long hours, initially as a waiter, and was eventually promoted to be the food and beverage manager in a five-star hotel. On weekends, my mom used to bring me and my brother to the Tsim Sha Tsui promenade in Hong Kong, where the waterfront is always packed with tourists. There, on the pedestrian footbridge fronting the harbour, we would be able to catch a glimpse of dad at work inside the hotel restaurant—with its magnificent, floor-to-ceiling windows—and wave at him.

Because he would spend all day talking to customers and colleagues, dad tended to be very quiet when at home. I felt quite ambivalent about this. I was also jealous of my other classmates who enjoyed family outings during the weekends. In the poem, my ambivalence or incongruous feelings made their way through the snippets of family knowledge and the sharp edges of the slashes. And I chose to highlight the word 嘥錢, a Cantonese slang meaning ‘wasting money’, a preoccupation for working class families, particularly in a consumerist society such as Hong Kong. 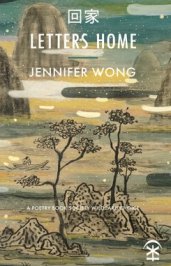 And as I looked for ways to complete my father’s portrait, I noticed how proud I am of him, how his work ideals and diligence have come to define him. Coming from a more working class background and without a university education, he wanted a different future for me, a future alien to him and his class, where more doors would be open with the promise of a good education.

There are also other poems in the collection that question the value of money (or wealth), poems that explore working class lives, and the intersections with racial and gender identities. Are you able to spot them?”

Jennifer Wong was born and grew up in Hong Kong. She is the author of two earlier poetry collections including Goldfish (Chameleon Press 2013). She studied English at Oxford, received an MA in creative writing at the University of East Anglia and earned a PhD from Oxford Brookes University. Her work, including poems, reviews and translations, have appeared in various journals including The Rialto, Poetry London, Poetry Review and Wasafiri, amongst others. She was runner- at the Bi’an Writers Awards and long-listed in pamphlet competitions, and the National Poetry Competition.

My father, who taught me how to fold serviette penguins

I was eight or nine when I saw you practise / folding serviette penguins. For a long time, / Christmas was a matter of watching fireworks on television / mother trying / not to let her feelings show. / And those evenings you came home / too tired to speak / your voice already spent with the customers. / Thirteen hours of pacing around dining rooms / impeccable cutlery well-ironed table linen other families’ / happiness under the chandeliers / that’s what work is, has been, for you / since you turned eighteen  / and for all the fathers in the golden eighties / it’s been     a hard day’s night / a husband must provide /as long as he is alive. I try to think about / who you really were, a schoolboy before duty / your father who never offered your mother / a kind word, a kiss / but he kept a white shiny statue of Mao / long after the cult was over. / You never finished high school / because your father said / he couldn’t tolerate the idea of excessive schooling, a sign of / moral corruption or 嘥錢. / The day I was accepted for the school / on 1 Jordan Road, where the school drive glittered with Mercedes, we knew / we were moving beyond our league. / And yet, and yet, it suddenly seemed / as if something was brightening again in you /something that has nothing to do with table napkins