In 1381 Wat Tyler led the peasant revolt against Richard II’s poll tax (Richard was a uppity fifteen year old at the time). The Black Death of thirty-five years prior had wiped out more than a third of the population, leading to a shortage of labour, thus increasing the power of the peasantry. The lords and landowners wanted to raise more money, in particular as the war with France was proving very costly. The peasants wanted a wage rise, the aristocracy wanted a poll tax. Things got a bit out of hand when Tyler’s lot marched on London from Kent, riots ensued, the King gave in, but was weak to implement promises, and Tyler had his neck slashed. 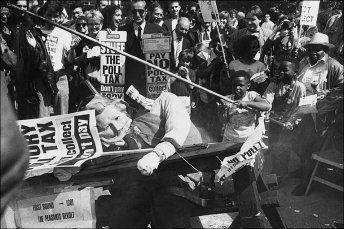 Thatcher tried to do a Richard II in the late days of her reign. The Community Charge, aka the Poll Tax, was the introduction of a per head tax, which negatively affected those on low incomes, but was popular with blue blood Tories. But like Tyler and his acolytes, the working class were having none of it. There were riots across the country, with a major disturbance in London where police cars had wooden poles put through the windows. As I’m sure most readers know, this is what brought the end of Thatcher; not by a general election but by her own party, who finally swallowed their fear allowing the charismatic, alpha male orator John Major to win an election nobody at the time predicted.

Jane Burn’s poem ‘THE COMMUNITY CHARGE, HOW WILL IT WORK FOR YOU?’ takes us back to the detail of this regressive tax, the anger and protests it caused. ‘How will it affect six heads in a poor house?/ Don’t register, Don’t Pay, Don’t Collect./ It does not matter what you earn or own – / a duke would pay the same as a dustman.’ I remember a lot us were up in court for non-payment; I left for London at the time, leaving my unpaid bill behind. And although we were to suffer another seven years of Tory rule, Thatcher was thrown out on her arse. ‘It was like every Christmas come at once/ when we knew that we’d won, then she said/ We’re leaving Downing Street/ and we knew ding dong, that the witch was dead.’ Such levels of protest seem to have been beaten out of the working classes. But more than ever, I feel we are in a time similar to, if not worse than the days of Thatcher. The Tories have squeezed/sliced/butchered local tax revenues, so the Council Tax is on the rise; and the state is swiftly shriveling, offloading services to private enterprise. We surely need a modern day Wat Tyler, doesn’t matter if he or she lives in Kent (although that is quite a handy launch point), any place will do; and make sure you bring all your mates.

Jane Burn is a writer originally from South Yorkshire, who now lives and works in the North East, UK. Her poems have been featured in magazines such as The Rialto, Under The Radar, Butcher’s Dog, Iota Poetry, And Other Poems, The Black Light Engine Room and many more, as well as anthologies from the Emma Press, Beautiful Dragons, Seren, and The Emergency Poet. Her pamphlets include Fat Around the Middle, published by Talking Pen and Tongues of Fire published by the BLER Press. Her first full collection, nothing more to it than bubbles has been published by Indigo Dreams. She has had four poems longlisted in the National Poetry Competition between 2014 – 2017, was commended and highly commended in the Yorkmix 2014 & 2015, won the inaugural Northern Writes Poetry Competition in 2017 and came second in the Welsh International Poetry Competition 2017.

THE COMMUNITY CHARGE
HOW WILL IT WORK FOR YOU?

How will it affect six heads in a poor house?
Don’t register, Don’t Pay, Don’t Collect.
It does not matter what you earn or own –
a duke would pay the same as a dustman.
Buckingham Palace as much as your nan.
Our mum, taking us four kids to Barnsely,
shouting at them at the Town Hall, how
am I meant to pay for all of these?
Fuck the working classes, Thatcher thought.
To those that stood and marched and fought,
raised placards, BREAK THE TORY POLL TAX –
thank you.
To those, battered to the ground by Thatcher’s thugs –
thank you.
To the APTUs, speaking for those who had no voice –
to the ones who helped us see that we had a choice,
thank you.
It was like every Christmas come at once
when we knew that we’d won, then she said
We’re leaving Downing Street
and we knew ding dong, that the witch was dead.
Thatcher, you wore
a tyrant’s crown.
Thatcher, you’re going
to hell.
Thatcher, you failed
to learn our strength.
Thatcher, you’re going
down.

THE COMMUNITY CHARGE…HOW WILL IT WORK FOR YOU? –
taken from a government leaflet explaining the new charge.

Today may be Easter Sunday, and it may be April 1st, but in this wonderful 24 hour 365/6 day year casino online economy, you can’t be fooled out of finding buds of goodness shooting up (even if it is snowing up North). Richard Skinner’s collection, The Malvern Aviator is one such bud which is published today and available from Smokestack Books. I am proud to say Richard is a Stablemate and for a number of gigs, will be my poet bro’ as we embark on our Rollercoaster tour promoting our books. You can buy Richard’s book from Smokestack here.

Below is the poem ‘Dark Nook’ by Richard from the archive, about the working conditions down the mines of the Isle of Man in the 19th century.

Coal has received most historic attention in terms of industrial development and of course industrial strife. Less is known of the importance of tin mining. There is a certain awareness of its history in Cornwall, but as Richard Skinner’s poem Dark Nook, and the research behind it shows, it was a feature in the Isle of Man as well. And unsurprisingly, like the experience of the coal industry, conditions were just as bad. However, you had to be lucky in the first place just to get the job. “I am Egbert Clague./I come every morning from Agneash/hoping for the nod from the bargain man.” When you did get the ‘nod’ it took you, “two hours to descend the ladders,/…The hole to go down is just two foot by two,” It was dangerous work and there was no compensation for accidents, so when Egbert’s legs are crushed, his wife has to work on the Washing Floor, sorting the ore from the stone. “It’s worse work than the mine—/she has no more feeling in her hands./I’ll be joining her there soon.”

Richard explains the research he carried out on a recent trip to the Isle of Man:

“I found the island to be a beautiful place full of myth and folklore but I hadn’t realised how much mining had gone on there, and over such a long period, too. The Great Laxey Mine was by far the largest on the island and comparable to some of the famous Cornish tin mines. The first shaft was started in 1824 and sunk to a depth of 247 fathoms (1482 feet). The next 30 years saw a further three shafts sunk. Miners worked two shifts—6am-2pm and 2pm-10pm—but when production peaked in the 1870s, mining carried on 24 hours a day. Cheap foreign imports hit the company hard and the mine eventually closed in 1914.

Miners worked in a team of six led by an ‘elder’ who would agree an amount per day with the ‘bargain man’, who represented the mine, and would split the money with the rest of his team. If you were ill or injured, you didn’t get paid anything. Gunpowder explosions were the most common cause of accidents. Some miners fell down shafts, others were killed by falling rocks or timber. Carbon dioxide—or ‘blackdamp’—was a constant threat. Heavier than air, it would settle at the bottom of the mine. Explosive methane, found in coalmines, was not present in the Great Laxey Mine so the miners could carry candles, the flickering of the flame alerting them when oxygen levels were running low.”

Finally, don’t think that tin mining is any less important today and that it doesn’t have a large social and environmental impact. As a report by Friends of the Earth stated: “If you own a mobile, it’s probably held together by tin from the Indonesian island of Bangka. Mining is wrecking the environment and every year it claims dozens more lives.”

Richard’s poems have been widely published. His full collection, ‘the light user scheme’, was published by Smokestack (2013). His pamphlet ‘Terrace’ (also from Smokestack) was published in April 2015. He is Director of the Fiction Programme at Faber Academy and has published three novels with Faber and Faber.

I am Egbert Clague.
I come every morning from Agneash
hoping for the nod from the bargain man.
It takes two hours to descend the ladders,
our tallow candles round our necks
like white asparagus.

The hole to go down is just two foot by two,
the spokes like blunt knives,
the blackdamp smelling awful. We chip
and hack until we see the sparkle
of the rich extraordinary,
haul it up through smoke to the adit.

One day, they brought me up
in the dead box, my leg crushed.
The Captain of the Mines
came in person to the cottage and said,
‘We can’t give you anything
and that will have to keep you.’

My wife Brenda is on the
Washing Floors now, sorting ore from stone
ready to ship to Swansea.
It’s worse work than the mine—
she has no more feeling in her hands.
I’ll be joining her there soon.

Meantime, I grow veg, read and
visit the village chapel on my sticks
to pray our Sooki will one day flee.
When I’m alone, I kneel and whisper,
‘The affection you get back from children
is sixpence as change from a sovereign.’