I am more than happy to be featuring Chip Hamer today. Chip has been a stalwart of the political poetry scene for more than a decade now. A proper selfless person he has led Poetry on the Picket Line raising thousands of pounds for striking workers. ‘A Class Act’ is Chip’s debut collection published by Flipped Eye, the incubator for many of our most highly regarded poets such as Warsan Shire and Malika Booker. Oh, and you’ve got to love the BJ pic from Chip’s day job back in 2012 (if you like, you can put a caption to it in the comments section below). So why not buy Chip’s book. You can get a copy here:

“It’s good to have the book published. Though the timing has been strange. Just a bit off from the start. First spoke to Paul, from Lunar Poetry magazine, about the collection, in 2012. In 2013, I asked Niall O’Sullivan to do the editing and got stuck into pulling the poems together. Did a good job there, I think (though we left out one particularly dystopian poem ‘Planet of the Apes’, that doesn’t seem quite so unlikely in current circumstances. It might get an airing again, one day. We’ll see). Some quite political poems in there, some quite personal ones.

Then a few things happened, and few things didn’t happen. I had a living to earn, the Poetry on the Picket Line thing kicked off (worked hard on the anthology, published by Culture Matters) and this book wasn’t a priority. Nevertheless, we finished the editing, chose the title poem ‘A Class Act’, and gave Paul a nudge. 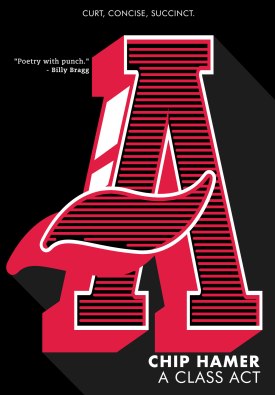 He did a few edits and then… it all went a bit quiet. Niall suggested Flipped Eye and I was keen (a pretty good fit, I reckon) but didn’t want to let anybody down. Anyway, it drifted a bit. Waited too long, to be fair. In the end, to cut a long story short, a big thank you to all at Flipped Eye for getting it out and doing such a good job with it. Published on May Day too! By then, though, we were all on lockdown. So, no big do at a pub. No little do, either. There will be one, though, trust me.

I’m very pleased with the way it has turned out. None of the poems in there are from later than 2013, and I’m proud of the way they stand up. Looking forward to gigging them again, too. Particularly to doing them with some of the newer material. I really hope this book shifts a few copies, as I’m keen to get the next one out in much shorter order (the poems are written, and the early edit work is underway). How to sell it, though? Proper gigs are out of the question for the time being. The only way right now is with a soft launch and a bit of an online push. Any positive reviews most welcome!

Considering doing some short films of the poems, reading them and talking a little about them. Maybe answering some questions I’ve had about particular poems. Then putting those clips online and seeing what sort of response they get. I’ve always said that my poems need to work both on the page and on the stage, so I can’t complain, but I do miss the live work. That little bit of crackle and nervous energy. Never quite know how it’s going to turn out, now do we?

I’m going to leave you with the last verse of ‘Hippy Chicks’. Just to capture that tension between hope and experience. It’s still happening, even now. Especially now.”

‘The fierce young patriots go out and put the fear of someone’s god
Into some women who have chosen an identity behind the veil.
The politicians argue about matrimony, man to man,
The trickle down they spoke of now revealed as faecal gravity.
It’s a hard rain, watch it fall.
They keep calm and carry on regardless,
We carry the can,
Suppress the rising tide of panic in our hearts
And hope the hippy chicks are proved right, after all’.

An active trade unionist and founder member of Poetry on the Picket Line, Chip Hamer is not the man you hoped to meet. He never forgets his mates, nor who his friends are. His first collection ‘A Class Act‘ was published by Flipped eye in May 2020. You can get a copy here.

BJ: Hello, who are you? Chip: Your worst f**king nightmare!