Is there enough anger in mainstream poetry today; in the journals/magazines and collections? In the US from Audre Lorde to Claudine Rankine, Terrance Hayes to Danez Smith, there is great anger in poems about the discriminations upon which that country is founded and governed. They make it into the pages of POETRY, and sell many books. Here in the UK, I’m not so sure. We may not have the scale of discrimination as felt by the US, but black men are still killed by police here, women are discriminated, abused, and killed by men, and let us not get started on the implications of Brexit and the hatred it has stoked.

This is not meant to be a comprehensive survey of anger in UK poetry, but off the top of my shiny head, there were the Liverpool poets, the original ranters of the 1980s who came out of punk; some still going strong like Tim Wells who chronicles those times in his site Stand Up and Spit. There are others in performance poetry and spoken word (as it is known); Anthony Anaxagorou’s Outspoken Press in London, which includes a number of BAME poets, such as Sabrina Mahfouz and Raymond Antrobus. There are other BAME poets, such as Kei Miller, Malika Booker, Roger Robinson, Nick Makoha (the latter published by the wonderful Peepal Press) who have great subtlety to the anger in their poems. Tony Walsh and Salena Godden from Burning Eye Books (to name only two from that stable) who have been treading the boards with their distinct brand of anger that is often done with humour. Smokestack Books, has consistently published radical, global voices, such as Amir Darwish and Steve Ely, for many years now.

Penned in the Margins publishes the aforementioned Tim Wells, and one of my favourite poets, Melissa Lee Houghton (who recently published Cumshot in D Minor, by Offord Road Press), whose poems of sexual abuse and misogyny burn. Of course, there are other publishers whose catalogue will include poets or poems of anger, e.g. Bloodaxe and Nine Arches Press, two of my favourite publishers, as well as some of Kim Moore’s past and present poems published by Seren. Then there are the online publications, with an overt social and political stance, which include Reuben Woolley’s ‘i am not a silent poet’ and Jody Porter’s ‘Well Versed’. (apologies for any glaring omissions I’m sure I’ve made, please feel free to add to the list in the comments below). However, I do feel these are on the margins. 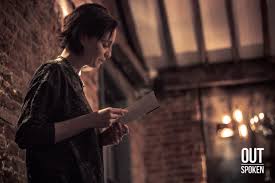 Fran Lock, who has appeared on this site a number of times, is, along with Melissa Lee Houghton, one of those electrifying poets both on the page and the stage. Since Flatrock in 2011, to the wonderful The Mystic and the Pig Thief (Salt – which no longer publishes poetry), through to Dogtooth (Outspoken Press), and our feature collection Muses and Bruises (published by Manifesto Press) Fran has consistently shouted down those who discriminate against the working class, women in particular. As she says in her introduction to the collection: “I was told once that my writing was inauthentic because working-class women don’t think or speak that way. Bollocks. I am a working- class woman, and I do write and think and speak this way. There is no one homogeneous working-class voice, any more than there is a single monolithic working-class culture. No one has any right to set limits on the way we sound or the words we use.” The collection is complemented beautifully with collages by Steev Burgess, which “bring this to the fore,[with] a mixture of decadence and squalor; grind and grime with a lick of glitter.”

The collection is in two parts; the first is a set of poems based on the muses of the arts from Greek mythology. Here is Clio, muse of history: “My mother was a Goddess, she could charm/ bees and her cheekbones were stunning./ Her silence gathered dust like an heirloom. //I am an unquiet child./ I see things and I must tell: //That man, grinning out from under/ the redacted oblong of his eyes, crawled/ from the comic opera of the past, dragging his period costume;” Similarly in the poem, Erato (muse of love poetry), there is the question of female identity from a patriarchal expectation: “And to top it all off, I’m expected to ride on a float, my face scraped on in a strong wind, all tits and teeth, rigid as any a hood ornament: winged Victory, pigtailed and pinioned. Bow to the crowd like Jackie O, glamming it up at an airport.” Fran is imagining Erato as a Connemara beauty queen who is not allowed to be seen as having any other ‘attribute’ than her physical beauty, and thus like the Greek muse, is imprisoned by it. 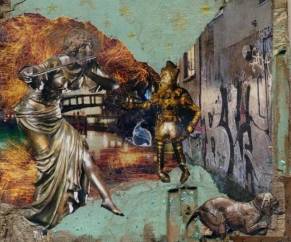 The second part of the collection is a wonderful grotesque imagining of a place called Rag Town and the girls who inhabit it, in particular the ubiquitous La La. In her notes on this section Fran says: “We have the right, and we deserve the space in which to be angry. I started writing the Rag Town sequence with this one thought looping endlessly in my head.” This was driven by Fran’s disillusion with what International Women’s Day has become; originally called International Working Women’s Day, the dropping of the ‘Working’ de-classed the day, so that in Fran’s words it has become divisive to raise issues of class as they relate to women’s oppression. “It’s divisive, for example, to say that white, settled, middle-class women “escape” from unlovable and undervalued domestic labour at the expense of working-class women, immigrant women, women in poverty.”

Towards the end of the collection, in the poem ‘Rag Town Girls see God’, there is almost an inverted elegy in its telling of the end of man as represented by the deity. “There he is, eyes half closed, doing the math of a difficult miracle, wrist-wearied, leaning into his swig, his pull of smoke. We assume he is God. He reminds us of a man we once knew: slender and insulted by life, mixing his blessings like strong drink, suicidally agile, tying a nimble noose the minute your back was turned.” The final poem in the collection has undoubtedly the longest and angriest title, aimed at the mainstream poetry world that ignores the ‘likes of us’: “Rag Town Girls Don’t Want to be in your Shitty Fucking Magazine/Anthology/Stable of Wanky, Middle-class Poets Anyhow.” These following lines from the poem end what is a brilliant collection masterfully complemented by the collages of Steev Burgess.

“How to fake it? How to keep it in, that jittery, impassable grief? Don’t scratch yourselves, girls. Bathe. Point your toes. Glowing in a backward light cast by everything you flee from. You like proper edges, incline a tin ear to the shrug and flutter of our debateable music. If we could only sing like you, a proficient, accredited language. But we can’t, so we won’t. La-la lit a fire instead. It ate a hole in everything.”

You can listen to Fran read two of the poems here and here. You can buy the collection published by Culture Matters/Manifesto Press here.

Fran Lock is a sometime itinerant dog whisperer and author of three poetry collections, ‘Flatrock’ (Little Episodes, 2011), ‘The Mystic and the Pig Thief’ (Salt, 2014), and ‘Dogtooth’ (Out Spoken Press, 2017). Her work has appeared in various places, most recently Communist Review, The Morning Star, POETRY, Poetry Review, and in Best British Poetry 2015. She is the winner of various competitions including the 2014 Ambit Poetry Competition, the 2015 Out Spoken Poetry Prize, and the 2016 Yeats Poetry Prize and was shortlisted for the 2017 Bread and Roses Poetry Award.

Steev Burgess has juggled his career with an interest in music and art, releasing records and holding his debut art exhibition of collage art in “Red Bologna” with the help of the Circolo Ricreativo Aurora ARCI. Taking a break from music, he concentrated his efforts on making better art and extending his writing skills by “writing proper poetry” and founding the Y Tuesday poetry club at the Three Kings in Clerkenwell. His work caught the attention of the Libertine’s John Hassall. Steev and John now have a song writing partnership with his new band John Hassall and the April Rainers, whose debut album “Wheels to Idyll” has recently been released.