My son is now eighteen, has a full-time job and is happy. He is ‘functioning’. This comes after almost three years of depression which at its worst involved self-harm and suicidal ideation. He left school in Year 10, couldn’t cope with another school, nor a part-time one. All schools found it difficult to support him, besides giving him extra time to do tasks, which was not what he needed. In fairness to them, although we didn’t realise it at the time, he simply needed to be withdrawn completely. So for him, no qualifications, no ‘normal’ pathway that as parents you just assume they will take (but boy, can he play guitar and knows his way round a recording studio). 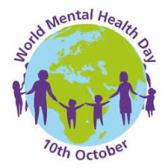 Fluoxetine and psychiatry didn’t help; it wasn’t until he was free of daily commitments, went on mirtazapine and saw a therapist fortnightly, that he slowly came back to us. He is now just at the beginning of withdrawing from the medication as it makes him very tired and sluggish. We will see how it goes. The reason I mention this, is that this year’s theme for World Mental Health Day (WMHD) is what’s termed, ‘wellbeing in the workplace’. For the coming weeks therefore, I will be seeking out advice and monitoring how he gets on at work as he begins the withdrawal process.

The poet, Emily Harrison, in her brilliant collection, ‘I can’t sleep ‘cause my bed’s on fire’ chronicles her journey through the teenage years and into her twenties of dealing with psychiatric institutions. She often does this with humour, as in the poem ‘Stockholm Syndrome’, and importantly on the theme of love, which has its own challenges. There are some beautiful and stark poems, and as I say some are very funny. But a poem that stuck out for me in light of WMHD is ‘For Display Purposes Only’, as it describes what goes on behind the closed doors of hospitals; where the prospect of work isn’t even a distant mirage. “Far from my window,/ I can see across the courtyard/ into the maximum security ward./ I watch violent outbursts/ I watch forced sedation/ I watch men of my father’s generation/ lose every way of expressing themselves/ because talking therapy never suited them.” Like Dan Duggan’s Luxury of the Dispossessed, this is a first-hand account of mental health crises and challenges (as well as other musings as in ‘Swindon makes me feel like a Russian Bride’), which don’t necessarily end because the person is now seen to be ‘functioning’ in the workplace.

Emily Harrison performs regularly in London and across the UK. She was awarded Best Spoken Word Performer 2016 at The Saboteur Awards. Emily has performed at Latitude, WOMAD and Glastonbury festival. “Astute and at times painfully humorous”, her first full-length collection ‘I Can’t Sleep ’cause My Bed’s On Fire’ was released with Burning Eye Books last year. She is currently working on a second collection. You can find Emily in East London. She’ll probably fall in love with you on the tube.

For Display Purposes Only

Jacqui leaves old orange peel and banana skin on my radiator,
says it smells just like potpourri.
To me it’s week-old bin liner on a hot day
but I don’t have the heart to tell her that.

When a nurse asks,
I don’t want to drop Jacqui in it.
I adopt her backward thinking reluctantly,
explain word for word
until the word potpourri loses all meaning.
He nods himself through it like I did.
It’s not that he doesn’t have the heart to tell me,
he doesn’t have the time.
There isn’t a box for that on the form
and he’s only allowed one Biro.

The last time I dobbed Jacqui in
they took her artwork away.
She got 7.5mg and couldn’t talk without dribbling.

From my window
I can see across the courtyard
into the maximum security ward.
I watch violent outbursts.
I watch forced sedation.
I watch men of my father’s generation
lose every way of expressing themselves
because talking therapy never suited them.

And now they sit in armchairs –
the ‘if you’re sat on it you can’t throw it’ theory.
They watch paint climb the walls –
the ‘stare at it long enough and it disappears’ therapy.
They wait for nothing to happen
twice.

Over this side we know to let things slide.
I’m staring hard at everything, hoping it all just disappears.

Everything,
except the smell of burning orange peel
and the word potpourri.