One of the stupidest things I have done (sorry Mum), which was brilliant, was walking through Coventry’s fairground at night, about one hour after dropping the freshly picked ‘magic’ mushrooms from the ‘Common’ land next to it. For those of you who have partaken in both activities separately, I hope you can imagine the heightened synesthetic experience that engulfed me. 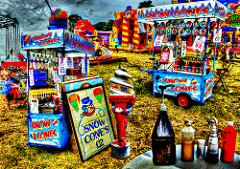 I never liked the fair (maybe that’s why I did the mushies); I was too scared to go on the major rides, a poor shot with my gammy eye for the different shies, and the music was invariably shit. The main thing I found interesting were the people who worked the stalls and rides. This was before I had any knowledge of their history and what now has become a somewhat jaundiced and discriminatory view of their ‘ways’ (sic).  They were outsiders that owned this island of fun which lit the sky for a week and echoed across the city; one lad stood out, covered in Man United patches, with straggle grease hair, he spun the waltzers with the girls in, or deftly stepped between the dodgems cars to keep the traffic flowing. All of course in the days when health and safety were the antithesis of the fun and therefore ignored. 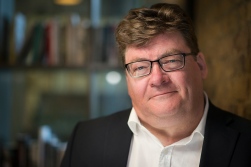 Fairgrounds have been part of the ‘bread and circuses’ of poor and working class amusement since medieval times. I think for everyone they evoke personal memories of their childhood and a shifting sense of history. This is certainly the case in John Burnside’s darkly evocative poem Hall of Mirrors, 1964, where “the perfumes that passed for summer/in towns like ours/touched, now, with the smell of candy floss/and diesel.” But this is not ‘a fairground so much’ and the colour that one associates with a fair is outshone by his mother who is wearing, END_OF_DOCUMENT_TOKEN_TO_BE_REPLACED