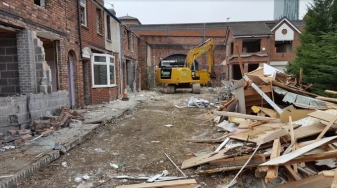 Coronation Street is no more. Not the show itself but the original set, which was dismantled last year – bulldozers ripped through the Rovers Return and Jack and Vera’s pad sharper than Hilda’s Ogden’s tongue. Gone also has the quotidian mundanity so exciting back in the day; when Corrie’s own Raquel Welch, Pat Phoenix went through men like fags and we were regaled by the regality of the ever-so-well-spoken Annie Walker. It is gone, but only to reappear in its new form; it reminds me of the China Miéville short story ‘Reports of Certain Events in London’ about, ‘autonomous streets which phase in and out of existence, living complex and mysterious lives of their own, and even having romances and violent feuds amongst their alley selves.’ Although, categorised as ‘weird’, it is not such a stretch of the imagination to see streets humanised in that way. END_OF_DOCUMENT_TOKEN_TO_BE_REPLACED