I used to play football for a Catholic school old boys team. At the time, I never thought much about the background of the lads playing (first generation English born Irish). We all believed in a United Ireland, sympathised with the Republican cause, but it was never really spoken about. When playing football however, I began to notice the divide amongst the different teams. Our lads would often be called a dirty Fenian, or IRA bastards by the white teams. Then there were all 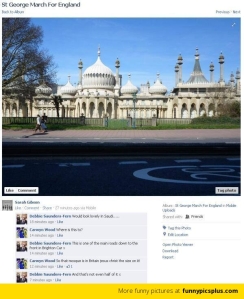 Pakistani teams, West Indian etc., who no doubt received racist abuse during matches. In fact, I remember the Irish manager of our team, once being cut up by a black driver on the way to a game and shouting, “You fucking black bastard, get back to your own country”, without any sense of irony. This was the 1980s, and time moves on, you would hope.

It used to be ‘No Irish, No Blacks, No Dogs’ where racism was casual in everyday use. However, we seem to live in a time where the racists think it a clever ‘political’ move, to couch their discrimination in a fight against ‘extremism’; which in today’s heated planet reads as anyone who’s a Muslim, or looks like a Muslim – I recently saw a picture of the Brighton Pavilion, where the English Defence League mistook it for a Mosque. It of course drew much bile from gullible racists. The latest incarnation of such a political strategy are Britain First, who in a documentary tried to show their ‘non-racist’ political opposition to mega-Mosques, yet when confronted by a man of sub-continent origin, shouted back at him, “Go back to the desert.”

You would think that all of this is beyond satire, but not for Amir Darwish, who in Sorry gives us so many things to laugh, marvel and cry about – “Abdul in the US is sorry for what so and so did;/He does not know him but he is sorry anyway”, or “If we forget to apologise for something, never mind,/We are sorry for it without even knowing it.” END_OF_DOCUMENT_TOKEN_TO_BE_REPLACED