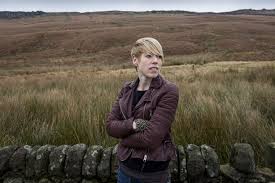 Today’s poem is ‘last orders for chesterfield’ and sees the author moving invisible through a town as it crosses night with day (night-shift workers going home). The imagery conveys Spring set in decay (a rusty bicycle, russet skeletons of cars) with the writer unseen by locals (the waiting drivers don’t look up or step aside to let me pass), her history erased (the churchyard wall is clean of my dark signature), and yet in some small way, the spirit of her remains (he might pause to wonder what it is that seems to stir). This is a dark and sad poem (when I reach my parents’ house it will be overgrown with waist high-nettles) but it is not maudlin nor does it demonise the characters it portrays, besides of course the taxi driver who quickly turns from hero to villain (the lass he rescued, ‘the slapper was locked out’)

Helen began her poetic writing as a ghost in a pub; her first pamphlet, ‘a pint for the ghost’ is a memoir of a time now lost but still resonates in the mind. It is a set of poems that Helen has performed as a sequence, a running monologue of different characters, in ‘worked-out mines, smoky pubs, and deserted highways’.

Helen’s most recent collection is Division Street, which was shortlisted for both the TS Eliot Prize and Costa Poetry Prize in 2013. Her poems are deeply rooted in fields, mines, and hills (she is a keen climber) of Yorkshire and beyond. I will no doubt be featuring a poem from this in the future.

So homesick in the fens
I couldn’t sleep, I rose before
this morning’s dawn
and groped downstairs
to find a rusty bicycle
abandoned at my gate.
I rode due north until
I reached the town I left behind
two years ago. Here,
it is spring and all the streets
are emptying their pockets
to the early breeze;
the air alive with starlings,
scraps of newspaper, laughter
of night-shift workers going home.
I scan the bus stop for a face
I recognise, though nobody
will meet my stare. And then I see
the churchyard wall is clean
of my dark signature. The pubs
have changed their names.
The Rec is wrapped
in an amnesia of hawthorn bushes,
russet skeletons of cars.
Behind the stripped out cinema
the buses glide straight past me
as I try to flag them down
and beside the taxi rank,
the waiting drivers don’t look up
or step aside to let me pass.
Animated by a story
one of them’s rehearsed all night:
The lass he rescued out at B’oser
picked her up without
a scrap of clothing on. Lover’s tiff,
he says, the slapper was locked out.
And as I walk unrecognised
up Hady Hill, and check
the houses for the comfort
of my own reflected face,
the night is catching up with me.
I can’t stop picturing
a girl alone and naked,
shivering on the wrong side
of the windowpane
and further from that world
than if she were a thousand
miles away. And I know
even before I’ve passed
the butcher’s shop, the corner Store
the park’s black railings
slick as spears, I know
that when I reach my parents’ house
it will be overgrown
with waist high-nettles, choked
by ivy, hidden by thorns.
I know before I’ve even
reached my local, with its
saloon doors that never closed
to anyone, I know
that I could stand here at the bar
for hours, because the landlord
will not see me,
though he might pause to wonder
what it is that seems to stir
there in the tap room
as he switches all the light off
and brings the boards in,
then stands in the beer garden
dragging on his cigarette,
staring at the moon, which
on a night like this, almost seems
to smoke in the dark above him;
a gun barrel after the last shot
has been fired.