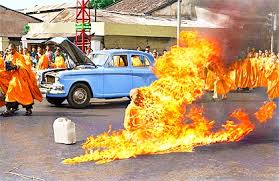 In 1963 the persecution of Buddhists in South Vietnam under the rule of staunch anti-communist Ngo Dinh Dien, had reached crisis point. On June 11th three monks walked to a crossroads in Saigon. One placed a cushion on the road upon which sat Thich Quang Duc, a highly revered Buddhist monk; the third man then proceeded to pour petrol over Quang Duc. The picture of the monk’s self-immolation went worldwide and is one of the most iconic forms of activism; the ultimate sacrifice for a cause, which has been undertaken in many notable cases, most recently Mohamed Bouazizi that sparked the Arab Spring.

Activism is an art form and comes in many shapes and disguises. It can be holding a placard, throwing a Molotov, standing in front of a tank, where you choose to sit on a bus, occupying a financial district, or as in the case of Pussy Riot, dancing in a church. In Egypt, much of the activism during their Arab Spring, came from young women, who were not allowed to protest at Tahrir Square for fear of violence against them. So they took the internet and became cyber-activists, sharing messages, feeding news to other protestors across the Arab world. Activism can also be the simple act of writing a poem as with Ai Weiwei. 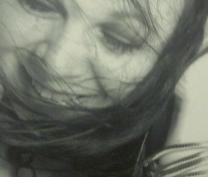 Susan Evans’ poem # Irony, covers some of these approaches to protest and the perceptions that arise. “Marching online she joins/the virtual protest ‒/bloke in armchair calls her/an `armchair activist’“ But you can also sign petitions “she shares petition after petition ‒/38 degrees”, or watch events unfold “‘The People’s Poets’ upload pics,/pleased as punch; bunched outside/Westminster,” driven by examples of friends who, as mothers are greatly affected by austerity measures as they “fiercely fret over/the going rate of the Tooth Fairy.”

A recent blog post at the Poetry Foundation asked the question: What is literary activism? A number of writers gave their views; notable was Melissa Febos, who said, “ ‘I share Alice Walker’s sentiment that ‘activism is my rent for living on the planet,’ and Fitzgerald’s resolution that, ‘I must hold in balance the sense of futility of effort and the sense of the necessity to struggle.’ ” What attracted me to poetry was my discovery that it was one of the great artistic forms of activism; whether in overt examples such as Shelley’s Mask of Anarchy, or Claudia Rankine’s Citizen, or many other more subtle forms of poetic activism that reflect on people’s lives as an illustration of injustice and inequality.

There is no single approach to activism. I believe you have to smash the windows of power, whether with stones or words, but you also need to get inside the building and work for change in a calm and measured way, as Jeremy Corbyn seems to be doing admirably in the Labour leader election in the UK.

Susan Evans is a performance poet from North East London, living in Brighton. She is a trained performance artist, arts lecturer and arts therapist. Her solo `scratch show’ A Bit of Oral premiered at the Komedia, Brighton as part of the Brighton Fringe Festival, 2010. While developing her show for a future tour, working on manuscripts, and facilitating arts in mental health, Susan enjoys featuring in fellow poets’ tours and events; looking forward to The Quiet Compere Tour (Camden show) October, 2015. Straddling stage and page, (page being a relatively new thing to reach wider audiences) she has been published in various print and online journals, including: Ink, Sweat & Tears, I am not a silent poet, Nutshells & Nuggets, Poetry Space (Winter Showcase, 2014) Prole (Issues 14 & 15) The Fat Damsel (Take Ten, Issue 3) The Jawline Review (US) The Stare’s Nest, Writing Magazine (April, 2015) and more. Susan’s also been anthologised by Brighton Stanza Poets, (Bramley Press) No Love Lost and Wherever You Roam (Pankhearst) and due to feature, as one of the winning poets selected for Spotlights Anthology, 2015 (Paragram). You may find her here:
https://www.facebook.com/pages/Susan-Evans-Performance-poet/485340264922817

She was unable to go to the
Anti-Austerity demo;
she hadn’t the fare to get there.

bloke in armchair calls her
an `armchair activist’:
sticking the knife in;
lateral violence is rife, as if
life couldn’t be more unfair

‘The People’s Poets’ upload pics,
pleased as punch; bunched outside
Westminster; all manner of banner:

Quite. Screwing without consent;
hell-bent on selling public aid
to mates ‒ fuck the rates of suicide.

Meanwhile, her beautiful, single-mum
friends, fiercely fret over
the going rate of the Tooth Fairy.