In talking with my wife the other day, we wondered which countries are doing well in the world today. Of course, ‘well’ is an abstraction and it was more easily answered in looking at those doing badly, or not so well. The world is unfurling, especially if we account for the use and impact of social media, exposing great instability. The whole European project is in question, not only in relation to Brexit, but also in terms of resolving proxy wars, as is the case in the Ukraine. Africa is on the whole improving in terms of headline indicators such as child mortality, although it is still high; however, within the individual countries, particularly those who are influential – South Africa, Nigeria, Kenya, Egypt, not to mention the fluid situation in Zimbabwe – there is instability. India quietly treads water, Pakistan is embroiled in the war in Afghanistan, as well with India through the proxy war in Kashmir. Brazil is also in a state of uncertainty over high level corruption charges. Both Russia and China are becoming increasingly authoritarian and emboldened by the lack of any countervailing powers, both internally, and with Trump, internationally. Pockets of hope come when looking at Scandinavian countries, with examples of Finland’s trial of universal basic income, maybe Canada will have some influence, and Australia has been immune to the international economic crisis – but the latter two examples feel like outposts beyond their geographic location.

Then we have the United States, which is not going quietly into the night. From this side of the Atlantic, it seems the country’s identity is riven with divisions that hark back to the civil war. And the biggest irony in all Trump’s hubris of making the United States isolationist again, is he loves playing draughts/checkers (he’s not clever enough for the chess metaphor) with international relations. In the case of those with North Korea he is being played by China, and to some extent Russia (although they are playing another game with the election interference). So today, we are in a situation where it’s like two children in the playground but both have nuclear weapons. Trump in questioning why Kim Jong Un would call him ‘old’ says, by not saying, that the North Korean despot is ‘short and fat’, to which he, the US president (I still find it hard to comprehend that he is) has been sentenced to death. 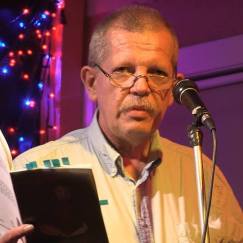 It is almost beyond cliché to say we have not learned the lessons of history; I say beyond, because of the hopelessness in feeling it could make any difference. But we have to; even if we feel we are repeating ourselves, because after all we are hoping not to repeat history. We see this need in poems such as Reuben Woolley’s ‘time comes counting / one two zero’, which is dedicated to the Coventry poet Antony Owen, who has written and campaigned for nuclear disarmament, in particular his work with the CND education programme and ties with Japan. In Reuben’s usual beautiful brevity and minimalist form, he captures the tragedy of nuclear war in Japan and the impact it still has for subsequent generations; certainly, a history lesson for us all.

Reuben Woolley has been published in Tears in the Fence, The Lighthouse Literary Journal, The Interpreter’s House, Domestic Cherry, Ink Sweat and Tears, The Stare’s Nest, And Other Poems, The Poetry Shed, The BeZine and Goose among others. He has a collection, the king is dead, 2014, Oneiros Books; a chapbook, dying notes, 2015, Erbacce Press; a short collection on the refugee crisis, skins, 2016, Hesterglock Press and a new collection, broken stories, just published by 20/20 Vision Media, 2017. Runner-up: Overton Poetry Pamphlet competition and the Erbacce Prize, both in 2015. He edits the online poetry magazines, I am not a silent poet and The Curly Mind.

when the rain comes
in shadows

the skins
they left
on walls / on
pavements

my
Nagasaki
heroes / my
hiroshima angels

they’ll not see
she said
not yet / not ever