Today we have the poet, life-writer and academic, Hannah Lowe. Her recently published pamphlet ‘The Neighbourhood‘, written before the current crisis, is so relevant to how we are living now; stuck inside yet still in close proximity to our neighbours. Hannah also addresses the critical issue of the Windrush scandal, with her poem ‘Deportation Blues’. You can buy ‘The Neighbourhood’ here (with ebook option here). So, here’s Hannah:

“I wrote the poems in The Neighbourhood as part of my residency at Keats House in 2018-2019. I thought the theme an interesting one to explore in terms of Keats’ life, but really I was thinking about the difference between wealthy, rarefied, predominantly white Hampstead, and multi-ethnic Wood Green, a few miles away, where I live, with its down-at-heel town shopping centre and shabby rows of pound shops and arcades. Poverty greets me every day in Wood Green. I live right off the high street, at the end of a precinct flagged by a big multi-storey car park, used as a base for local drug users. All the accoutrements of poor urban living are here – homeless people in the doorway, unkempt streets, fly-tipping. It’s not unusual to see a couple of kids running for their lives with an armful of tracksuits just lifted from JD Sports, the shop staff in hot pursuit. 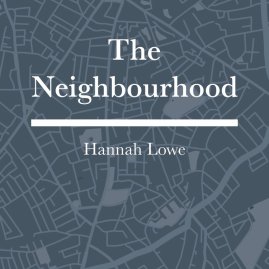 But for all of this, this little area houses many people, or perhaps a better word, it homes them. Above the shopping centre are two residential complexes, Paige Heights and Sky City – architecturally unique when they were built – like neighbourhoods in the sky. You wouldn’t know they were there, looking up from the street. And on one side of the high street lies the vast Noel Park estate, street and after street of Victorian cottage style houses, originally built to home artisan labourers.

So the poems in the neighbourhood emerge out of thinking about how people live close by and high up in overpopulated urban areas. But the emotional energy of the poems probably comes from becoming a mother during the time I’ve lived here. The sequence opens with a dream-poem about losing a baby in an unfamiliar neighbourhood, but closes with a small boy (my son is now six), freely scooting down Wood Green high street, levitating cars and buses out of his way.

In between are poems about gentrification, communal spaces, how children negotiate living in busy, urban spaces, and of course about neighbours. Though the poems celebrate community, not all are cheerful. Both ‘The Trucks’, and more explicitly ‘Deportation Blues’ (see below) concern the forced removal of people because of the hostile environment policy. The latter poem is based on the crucial work of the academic Luke de Noronha, who has traced the outcomes of those forcibly deported from Britain to Jamaica. The form of the poem – a pantoum – with its repeated and varied lines, I hope captures the sense of this ongoing repeated cycle of violation. I also hope it injects some feeling of the personal into a story often generically reported in the news. All the details in the poem are based on real deportees.

I write this from my balcony, three weeks into the Covid19 crisis lockdown. Out of this unfolding tragedy has emerged a great sense of compassion within communities and social action at a grassroots level. It reminds me of how important our neighbours and neighbourhoods are, and how we must fight to protect them.

Hannah Lowe’s poetry books include Chick (2013), Chan (2016) and The Neighbourhood (2019). She has also published three chapbooks: The Hitcher (Rialto 2012); R x (sine wave peak 2013); and Ormonde (Hercules Editions 2014). Her family memoir Long Time, No See was published by Periscope in July 2015 and featured as Radio 4’s Book of the Week. hannahlowe.org @hannahlowepoet

From small and airless rooms,
they are taken, handcuffed, to silver coaches –
the ex-soldier, the diabetic, the boy who came aged three.
The aeroplane leaves at dawn.

They are taken in silver cuffs
with black-coat escorts on either side.
The aeroplane leaves at dawn.
They are body-belted to their seats

with black-coat escorts either side –
security guards on hourly rates
who body-belt them to their seats,
the man who struggles and shouts

until the guard on hourly rates
closes his hands around his head
until the man cannot struggle or shout.
The one who drops his head in prayer,

closing his hands around his head.
He has six children, three under five,
the one who drops his head in prayer
and two convictions for weed, for speeding.

He has six children, three under five.
He can’t remember Clarendon, Jamaica
but two convictions for weed, for speeding.
They deport you for this.

He can’t remember Mocho, Jamaica,
the young one who grew in care.
They deport you for this.
I need to get back to my son, believe me,

the one who grew up in Manchester.
After the heat, the fingerprints, the interview,
I need to get back to my son, believe me.
It was my little daughter’s birthday.

After the heat, the fingerprints, the interview,
the one who grew up in Yorkshire,
it was my little daughter’s birthday.
Up all night dialling his wife, his mother,

the one who grew up in Yorkshire,
in these small and airless rooms
up all night dialling wives, mothers, England,
the ex-soldier, the diabetic, the one who came aged three.