Collateral damage. Casualties of war. Seen but not heard. Neither seen nor heard. There are none. They don’t exist. They are the cradle of terrorists. Rubble is their toy. Ideas are their weapons. They are not children. They can’t be children. Let us not hear of such things.

Propaganda and censorship are the recognised tools of government; whether that government be the so called western liberal kind, or one more akin to North Korea. Of course, they use different methods in the use of these tools but essentially they serve the same purpose of maintaining power, done in the guise of protecting the values, ethos, or way of life of its citizens. Violent conflict is famously said to be an extension of such forms of politics, but by other means.

War is a different beast than it was a hundred years ago; the dead of the First World War were soldiers. Because of the aerial bombardments characteristic of the Second World War there were far more civilians killed. Today’s wars are said to be different than any other because the fight is now between states and non-state actors (aka terrorists/freedom fighters). But what is common in this new form of warfare to the WW2 is the amount of innocent civilians killed. Actors on both sides, whether through suicide bombs, drones, or barrel bombs are indiscriminate in trying to achieve their bloody aim. 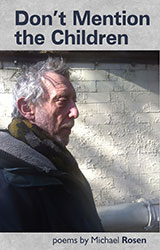 And it is children, who are the most vulnerable civilian casualty of them all. Michael Rosen highlights this tragedy chillingly in his poem Don’t Mention the Children. The poem refers to the banning by the Israeli Broadcasting Authority of an advertisement by the human rights organisation B’Tselem, where it listed the names of the children killed during the bombing in Gaza by Israel. Every country has its right to defend itself; however, it is an issue of proportionality, which lies at the heart of any response. (Bernie Sanders recently challenged Hilary Clinton over this matter, and she refused to condemn the bombing as being disproportionate). So Michael shows how ridiculous this ban was: “The names of the children must be hidden./The children must be nameless./The children must leave this world/having no names.” Only by erasing such acts from history, can they be kept from the world’s view allowing future actions to continue.

Here is Michael reading the poem:

But not only should we mention the children, let us hear what they have to say themselves. Let’s listen to the children. Here is one short account of a nine year old’s experience of the bombing in Gaza in 2014:

“Even our apartment has been bombed. The aim is to make us displaced in UN schools and then be a target for tank shells. As you see we had our three shops completely destroyed, but I know fully in my heart that God will compensate us. Till the last day of the war, we remained in our apartment, but when the apartment next door sustained damages, we ran to seek shelter at my grandpa’s place in Shujayea, and there it was bombed again. We ended up going to relatives in the west. There is nowhere safe. Even al-Shifa hospital has been targeted.” (Osama Ejelah, aged 9)

Michael Rosen was born in North London in 1946. His parents were both teachers. After university he worked for the BBC on Play School and Schools TV. He currently presents Radio 4’s long-running Word of Mouth. His many awards include the Eleanor Farjeon Award for distinguished services to children’s literature. He is the Chevalier de l’ordre des artes et des lettres and was Children’s Laureate from 2007-9. He is Professor of Children’s Literature at Goldsmith’s, University of London. Don’t Mention the Children is taken from his collection of the same name published by Smokestack Books in 2015.

Published with kind permission of the author.

The late great Liverpool football manager Bill Shankly had many famous sayings that are repeated to this day. The one that struck me growing up was, “Some people believe football is a matter of life and death, I am very disappointed with that attitude. I can assure you it is much, much more important than that.” Although I have followed football all my life, I have rarely, if ever

worn my team’s shirt. For one, I didn’t want to get beaten up by any wayward away fans; and two, I have never liked the tribal allegiance element of the game nor the violence that lies behind it.

Football is also not devoid of influencing national politics to the point of igniting armed conflict as was the case in 1969 between Honduras and El Salvador. The political map influences where teams will play; most notable being that the Israeli national team and its clubs compete in Europe. The Palestinian team was only recognised by FIFA in 1998, but has great potential despite the political and social conditions that surround it. I bought the Palestinian football shirt, as a small act of support when at the large protest march against the war in Gaza last year.

Of course, football is a passion among many people in Gaza and the West Bank, and Zeina Hashem Beck puts that into stark perspective in her heart-breaking poem Inside Out, where she paints a scene of Gaza under attack during the World Cup in Brazil in 2014. “my friend’s mom in Gaza is cheering/for Brazil and Holland/all that orange/burning almost/a sunrise all that/smoke”. Zeina goes back and forth from the football to the terrible scene unfolding, “there’s an old woman/who dies holding/her spoon waiting/for iftar/which comes but so do/the rockets/and the news/Brazil loses to Germany 7-1”. The poem continues without punctuation reflecting the relentless nature of the Israeli bombardment, until the end of the tournament when, “a player kisses a trophy/his wife his son/a mother/kisses a dead child/grief inside out/is resistance” Like Laila Sumpton’s poem ‘Morning Prayers’, Zeina juxtaposes the everyday events we take for granted, such as watching a football match with the tragic situation in which Palestinian people live, in a wholly different type of everyday event. END_OF_DOCUMENT_TOKEN_TO_BE_REPLACED