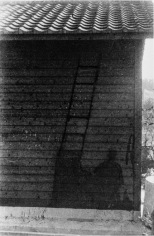 How can you have a shadow without the subject? The picture (right) is the shadow of a Japanese guard taken by Matsumoto Eichii only a few weeks after the bombing of Nagasaki. The image is the burned-in imprint of the man with his ladder and sword at his side. We have just marked the 70th anniversary of the bombing of Hiroshima and Nagasaki in August 1945, and it is images such as these that remind us of such horrors.

The photograph of the soldier was part of an amazing exhibition, Conflict, Time, Photography at the Tate Modern in London last year. I was fortunate enough to be on a poetry course run by Pascale Petit at the gallery that used the images from the exhibition, to write poems. Many great poets have drawn on classic paintings for their poetry; Pascale herself drew on the life and work of Frida Kahlo in her TS Eliot shortlisted collection, What the Water Gave Me.

Anthony Costello has taken this approach in his poem Work, which is inspired by Ford Maddox Brown’s painting. The pre-Raphaelite Brown was fascinated by the social make up of Victorian London, with the noble ‘navvies’ (“like my labouring Irish ancestors/amongst the soil, shovels and lime”), the orphaned children and poorest (“flophouse inmates, bouncers, ragamuffin children”), and upper classes (“the gentlemen-flaneurs,/the yellow waistcoats and red bonnet Gentry”). In a single painting, a single poem, we have the Victorian system of work and hierarchy – ‘a place for everyone, and everyone in their place’. END_OF_DOCUMENT_TOKEN_TO_BE_REPLACED