In 1999, we used to live in Camberwell, South London in a top floor flat that overlooked the Camberwell Road and all of its ‘activities’. Besides watching Concorde fly over in the late afternoon with my newborn son, there would often be exchanges of different points of view on the street below. Then into the night, the club across the road would see the usual overspill of happy/violent drunks. However, maybe it was because I had already lived in London for seven years, or had known violence from living in Coventry, but I never felt threatened or in danger. Up the road in Loughborough Junction, there was a number of gang related murders, but otherwise it felt relatively peaceful. END_OF_DOCUMENT_TOKEN_TO_BE_REPLACED

In almost every country, in particular those where guns are prevalent, the murder rate is overwhelmingly men killing men; whether in gangs, organised criminal activities, or random acts of violence. Yet, it is women, mothers especially, who are at the forefront of the grieving and action to stop further killings of their sons and partners. In the UK, there are initiatives such as the Mothers Against Violence in Manchester, in a number of US states MOMS Demand Action for Gun Sense in America, there is even a Grandmothers version of this group.

Of course, in zones of conflict and state-sanctioned violence, the pattern is even worse. In Argentina, during military rule in the 70s & 80s, it is estimated that 30,000 people went ‘missing’. It is the mothers, sisters, aunts, who turn up at political institutions, holding pictures of their loved ones who were taken by the junta, asking for information. In the once besieged town of Raqqa in Syria, families are now searching for their men who went ‘missing’ at the hands of Islamic State. And one can only imagine how widespread this is in Syria at the hands of the government. 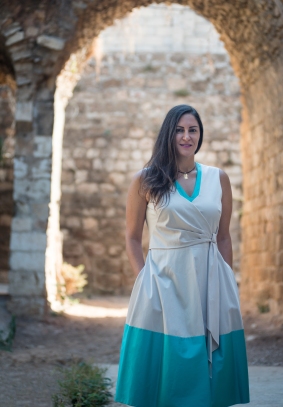 Zeina Hashem Beck’s poem, ‘Message from my Aunt on her son’s death anniversary’, beautifully tells of the narrator’s relationship with her aunt who lost her son ‘to a shooting on the street’. This is done through the seemingly blunt tool of texting and emoticons, but what is told is poignant, sad, and also uplifting, about a love between an aunt and niece – two women grieving over the loss of another man to gun violence.

Zeina Hashem Beck is a Lebanese poet. Her most recent collection, Louder than Hearts, won the 2016 May Sarton NH Poetry Prize. Her work has been nominated for the Pushcart Prize, won Best of the Net, and appeared in Poetry, Ploughshares, World Literature Today, the Academy of American Poets’ Poem-a-Day, and elsewhere. Her poem “Maqam” won Poetry Magazine’s 2017 Frederick Bock Prize.

Message from my Aunt on her son’s death anniversary

My aunt, the one who lost a son
to a shooting on the street, the one slowly losing
her sight, sends me voice messages and emoticons,
prayers like A fortress, my love,
protect you from harm in all directions –
above and below you, behind and before you.

Today, the emoticon is an orange.
Perhaps it’s a mistake. Perhaps she means
a kiss, or a heart, or a flower,
her eyes and aging fingers failing her.

But perhaps she means the fruit, remembers
how she used to sing me that song
where I was the orange she wanted
to peel and eat and not share with anyone,

remembers how much I love sour winter oranges,
the way they are round and whole, yet break
into many bright crescents hidden beneath their skin.

Perhaps she’s saying what she always says
when she opens her arms and walks towards me,
I was telling myself you must have arrived.
The whole town smells of oranges when you are here.

The two sides of the same football coin can sometimes be summed up as being humour and violence; and what they both have in common is camaraderie, whether for good or ill. The depths of a football fan’s self-deprecating humour can be many leagues under the sea. At one of the rare Coventry versus a Premier League side games I went to, Arsenal beat us 6-1 in the League Cup at the Emirates. A night game in London, everyone had a blast, pissed up, singing the old songs that harked back to our own Premier League days. A few months later, we played Tottenham in the FA Cup 3rd round at White Hart Lane, and were duly beaten 3-0. So, what did the Cov fans sing to the jubilant Spurs fans? ‘You’re not as good as Arsenal’, because they put six past us and their North London rivals could only manage three.

Next Summer the English fans, for it is only they after the near misses of Scotland, Wales, and both Irish teams, will be heading to Russia for the World Cup. The media are already licking their lips at the prospect of trouble. A BBC documentary on Russian football ‘hooligans’ interviewed a number of organised gangs; those who caused the violence in Marseille in 2016, and were more than looking forward to the arrival of their English counterparts on home soil. There was no hint of irony in explaining how they were merely copying what English fans had been doing domestically for decades; but their perspective felt very dated, as though the UK terraces were still all-standing, and lads with mullets wearing bomber jackets, were going at each other. They are already planning pre-tournament jollies of violence, with the upcoming game between Manchester United and CSKA Moscow, where they plan to team up with their domestic rival like Zenit St Petersburg to cause havoc. No doubt Putin has a hand in it, even if it is only by riding a horse with his top off, and doing judo with giant fish in the Baltic Sea.

It is therefore nice to have a poem such as Mike Jenkins’ humorous “Alternative CCFC CV”, (his CCFC is Cardiff, not Cov) that marries the comedy of football fans with their penchant for a little bit of aggro. “I’ve stood on the North Bank, Vetch Field,/ supporting the wrong team/ (lucky we never scored!).// I’ve carried on striding/ straight into a marauding Chelsea firm/ saying ‘I’ve lived in Belfast’ to a fleeing friend.” It reminds me a little of the loveable rogue Robbo in Patience Agbabi’s poem, “A Devil in Cardiff”, ‘who would sell his nan for a pint’. But for all their love of the game and roguish ways, would you really want those types of activities on your CV? Maybe.

I’ve carried on striding
straight into a marauding Chelsea firm
saying ‘I’ve lived in Belfast‘ to a fleeing friend.

I’ve had a whole pint
poured down the drain
by Devon cops, just because City.

I’ve met the leader of the Soul Crew
running away from trouble,
but urging us to join in.

I’ve reached the depths of despondency
after the play-off loss to Blackpool
and vowed not to eat oranges again.

I’ve been to games in the Dungeon
on wet, freezing Tuesdays
when the police outnumbered fans.

I’ve seen droogies in bowlers
carrying umbrellas on the Bob Bank;
had an umbrella confiscated as a weapon.

I’ve witnessed Boro fans doing the Ayatollah
after we beat them in the FA Cup,
when Whitts scored with a rare right-footer.

I was there when Pompey took the Grange End
and our fans climbed the floodlights
as Man U threatened to invade.

I’ve broken my mobile and glasses
in goal celebration ecstasy.
Can I have that job in Security?