‘No Tenemos Miedo’, is the status many Latino young people have been using in the US; they are undocumented and unafraid to say so. They, and others who support them in their now precarious situation, have been turning to art to protest against the rise in hatred towards them. In the past week we have seen the terrible scenes in Charlottesville, where the worms of fascism have come out of the rotten word they have been living in to spread hatred. This has undoubtedly come from the permission gave them by Donald Trump, and his rhetoric against the Mexican people and his ‘promise’ to build a wall. 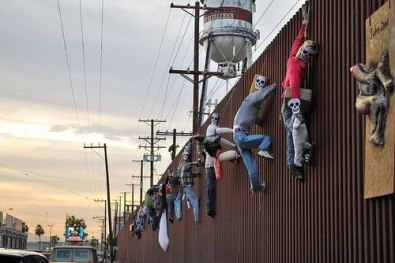 There is already a wall along the US/Mexican border, and in many parts there are works of art protesting against what it stands for. One exhibit has a series of day-of-the-dead like mannequins, hanging from the wall. It is a powerful image. Across the world, where walls have divided people, protest art has inverted the purpose of the canvas. From the Berlin Wall, to the Israeli Wall, and the Peace Wall in Northern Ireland, there are beautiful but at the same time heart-rending images to remind people, either of the reason they are there and/or the damage that they do, e.g. in cutting off families, or families from their land, etc.. 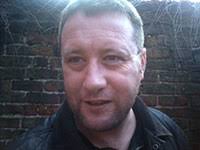 Jon Tait’s poem Kinmont’s Bairns goes back in time to another protracted and recently resurrected border dispute, that of Scotland/England. And like murals on border walls, “There’s a mosaic of the capture of Kinmont Willie/ on the underpass wall./ Bearded, defiant, trussed up on horseback/ with a cheering crowd following behind.” But it is down to the artist, or the commissioner at least, of the stance the picture is meant to take, for in this case, it is “Funny, but they don’t have one/ of his escape from the square red fortress.” Jon is from the borderlands, and I have often thought how different that must be to living anywhere else; even in a time where the situation has been unchanged for centuries, it gave rise to such more mundane anomalies as Berwick, which is in England, plays in the Scottish football league. But as Jon alludes to in the poem, such figures as Kinmont Willie, may exist today, informed by their heritage, “like Tony Soprano,/ hot espresso and cigarettes on his breath/ with his crew sat around like crocodiles.“

Jon Tait has worked a string of manual jobs such as a postman, joiner, labourer and building site storeman. He was born in Northumberland and now lives and works in Carlisle with his family. He has previously written two chapbooks of poetry – Midnight at the Snake Motel (Alternating Current, 2010) and Lucky to get Nowt (Blackheath Books 2011) and a walks book, Northumberland: 40 Coast and Country Walks (Pocket Mountains 2013). His first novel, First Plane Home, was published by GMTA Publishing in 2015 and his first full poetry collection, Barearse Boy, was published by Smokestack Books in 2016. He has a degree in Journalism from the University of Cumbria.

There’s a mosaic of the capture of Kinmont Willie
on the underpass wall.
Bearded, defiant, trussed up on horseback
with a cheering crowd following behind.
Funny, but they don’t have one
of his escape from the square red fortress.

No-one scrawls graffiti on this wall,
as if his power and influence have carried on
down the centuries when now
he’d be sitting in a back room of a barbers,
a butcher shop or bookies
hair starting to go bald at the crown
open-collared polo shirt
the flash of gold from his thick chain
against his hairy chest,
holding court like Tony Soprano,
hot espresso and cigarettes on his breath
with his crew sat around like crocodiles.