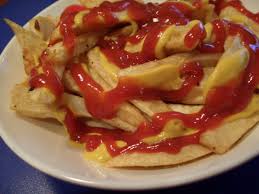 My first taste of independence came when I had authority over the amount of ketchup I spread over my tea. It wasn’t like drizzling icing over a cake because this was the days of the bottle, where if you weren’t careful, huge globules would flood your ham, egg and chips; with the introduction of the squeezy bottle in 1983 more children were allowed the treat of splurging their food with the essential accompaniment. But it also gave rise to the more refined way of putting a dollop on the side of your plate which I reckon also means we waste more ketchup – that’s right it’s a capitalist ruse! Just to be sure that the iconic bottles are still used to their most wasteful effect, Heinz has shown that by tapping the 57 moulded into the glass, you can release the ketchup with the same ease of the squeezy variety. My sons often leave a red mark on their plate that I have to wash away, as I cry into the sink.

Gone are the days when food was a simple menu of boredom and over-cooked meat and vegetables (with the latter limited to carrots, cabbage, and a tin of processed peas). Although the nutritional value of food today is expansive, I believe it has a paradoxical effect on today’s teenagers, which sees them being an inch or more taller than previous generations (I am only 5ft 6ins – a hundred years ago I would have been 5ft 2in) but also heavier, and not just because of the increase in height but also excess baggage with its associated ill-health effects The UK is the fat man of Europe, with a 25% obesity level (it was 1-2% in the 1960s).

But I have veered into the serious, which I’m trying not to do for once. This feature was prompted by the poet, Amy Key who on Twitter posted a picture of a salad (see below) from her childhood, accompanied by jars of pickled onions, beetroot, and mayonnaise; to which I responded by saying that my working class credentials were undermined by the fact that I never liked corned beef, but in my defence I never liked salad either. I then asked for a salad poem, to which I am very pleased to say was answered by Robin Houghton, with her poem ‘Teatime in the Seventies’. This is such a lovely poem in how it depicts the way children vet their meals, as though making sure they weren’t being poisoned by their parent: ‘I’d…decide how little lettuce/ I could get away with eating/ hide a few slices of cucumber/ under an oblong of corned beef.’ Dinner was the punishment, pudding the reward, as we were ‘forever eyeing up the cake to come/ and jelly’. We’ve all been there. If you’re looking to go back in time in the way Robin has, check out the twitter account, @70s_party, it is so colourful and yummy. 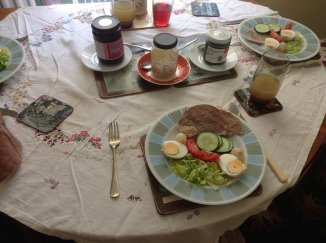 Food and its condiments are a major industry and have a great impact on cultural differences across many groups. But food is also a great pub or caff conversation, debate, fight in the car park, that goes along the lines of ‘how could you eat that?’, ‘I always have chips with my full English breakfast’, on and on to ‘you are what you eat’. And all that without the deep political and social divisions caused by which type of brown sauce you like (Daddies? HP?). I’m keeping out of that one. Eat on people, eat on!

Robin Houghton is originally from South East London. She’s a writer of everything from email newsletters to ‘how to’ books. Since 2010 her poetry has appeared regularly in magazines including Bare Fiction, Magma, Obsessed with Pipework, Poetry News and The Rialto, and in many anthologies including The Best New British and Irish Poets 2017 (Eyewear). She won the 2013 Hamish Canham Prize and the 2014 Stanza Competition. Her pamphlet The Great Vowel Shift was published by Telltale Press, the poets’ publishing collective she co-founded, and a second pamphlet All the Relevant Gods is forthcoming in 2018 from Cinnamon Press. She blogs at robinhoughtonpoetry.co.uk

Teatime in the Seventies

six o’clock and Sunday tea –
nothing Betjeman about it
no tennis court on the lawn –
my mum cutting crusts off the bread
with a face that remembered rationing
I’d sit up and try to stab tomatoes
with a tea knife, decide how little lettuce
I could get away with eating
hide a few slices of cucumber
under an oblong of corned beef
say ‘no thank you’ to the beetroot
turning everything purple
and the gloop of Heinz Salad Cream
I’d chase a hard egg yolk ball around the plate
having freed it from its white
dawdle over the bread and butter
forever eyeing up the cake to come
and jelly.