I have been heartened by a number of things in poetry recently. As previously featured, Poetry on the Picket Line, is a great initiative to support striking workers in dispute with their employers; most notable in London has been the refusal by Picture House cinemas to pay their staff a Living Wage, as well as cleaners at the LSE. Saturday before last, I read alongside a number of poets, in a benefit gig at the Betsey Trotwood (a good pub in Farringdon) to raise funds for the strikers. It was a great night and raised over £300 – I bid successfully for Billy Bragg’s solidarity signature. Hats off to the organisers, Nadia Drews, Mark Coverdale, and Chip Hamer, and hosting from Tim Wells and Janine Booth.

Last week, I received my contributor’s copy of On Fighting On, an anthology of working class poetry published by Manifesto Press (supported by Unite union), through the Culture Matters, which is skillfully edited by Mike Quille. It was part of a competition they ran earlier in the year. I am alongside a number of poets who have appeared on Proletarian Poetry, such as Fred Voss, Fran Lock, Owen Gallagher, Mike Jenkins, Steve Pottinger, and coming up soon, Martin Hayes.

In keeping with the punk ethic of working class poetry and do-it-yourself, I got a fantastic pamphlet by the poet Robin Houghton, of the indie co-operative Telltale Press. It is called Footwear, and is a short memoir-like set of poems to do with, yes, you’ve guessed it, ‘footwear’. Robin made the pamphlet herself, as well as the poems of course. With my Proletarian hat on (I must get an actual one), I really liked the penultimate poem, ‘Handmade in Guangzhou 2.’ “Long tables in the machine room/ ribbons of women/ pressed together in pairs, bowed/ as if praying to the Western god/ of sports & leisure.” You can find out how she did it here. Robin made fifty (mine is number 9), it is a great idea. 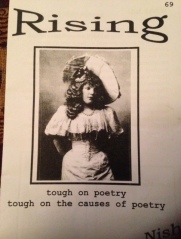 Finally, on that note, I want to give mention to Tim Wells poetry fanzine ‘Rising’, which he hands out for free at different events, the latest of which is Issue 69 and includes the brilliant Paul Birtill, Phil Jupitas (Porky the Poet), Jemima Foxtrot, Salena Godden, and many more.

So the true meaning of the word ‘anarchism’, i.e. of doing it yourself, is alive and well, in working class poetry at least.

My first taste of independence came when I had authority over the amount of ketchup I spread over my tea. It wasn’t like drizzling icing over a cake because this was the days of the bottle, where if you weren’t careful, huge globules would flood your ham, egg and chips; with the introduction of the squeezy bottle in 1983 more children were allowed the treat of splurging their food with the essential accompaniment. But it also gave rise to the more refined way of putting a dollop on the side of your plate which I reckon also means we waste more ketchup – that’s right it’s a capitalist ruse! Just to be sure that the iconic bottles are still used to their most wasteful effect, Heinz has shown that by tapping the 57 moulded into the glass, you can release the ketchup with the same ease of the squeezy variety. My sons often leave a red mark on their plate that I have to wash away, as I cry into the sink.

Gone are the days when food was a simple menu of boredom and over-cooked meat and vegetables (with the latter limited to carrots, cabbage, and a tin of processed peas). Although the nutritional value of food today is expansive, I believe it has a paradoxical effect on today’s teenagers, which sees them being an inch or more taller than previous generations (I am only 5ft 6ins – a hundred years ago I would have been 5ft 2in) but also heavier, and not just because of the increase in height but also excess baggage with its associated ill-health effects The UK is the fat man of Europe, with a 25% obesity level (it was 1-2% in the 1960s).

But I have veered into the serious, which I’m trying not to do for once. This feature was prompted by the poet, Amy Key who on Twitter posted a picture of a salad (see below) from her childhood, accompanied by jars of pickled onions, beetroot, and mayonnaise; to which I responded by saying that my working class credentials were undermined by the fact that I never liked corned beef, but in my defence I never liked salad either. I then asked for a salad poem, to which I am very pleased to say was answered by Robin Houghton, with her poem ‘Teatime in the Seventies’. This is such a lovely poem in how it depicts the way children vet their meals, as though making sure they weren’t being poisoned by their parent: ‘I’d…decide how little lettuce/ I could get away with eating/ hide a few slices of cucumber/ under an oblong of corned beef.’ Dinner was the punishment, pudding the reward, as we were ‘forever eyeing up the cake to come/ and jelly’. We’ve all been there. If you’re looking to go back in time in the way Robin has, check out the twitter account, @70s_party, it is so colourful and yummy. END_OF_DOCUMENT_TOKEN_TO_BE_REPLACED

Last night I intended going to the Poetry Cafe but life got in the way. It was the second London event of Telltale Press, a poetry collective (this site likes collectives) set up by ‘poetgal’ Robin Houghton. There were some great poets on the card and besides wanting to meet Robin for the first time, I was looking forward to hearing Catherine Smith reading from her new collection, The New Cockaigne. Instead, after doing many other things, my thoughts veered towards that dark, featureless street in the heart of Covent Garden. END_OF_DOCUMENT_TOKEN_TO_BE_REPLACED