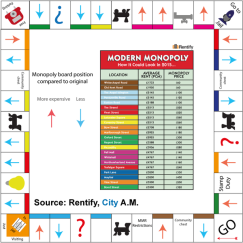 I think we have all seen those World War Two prisoner of war movies, where the men connived their escape in secret, digging tunnels with makeshift, man-made tools, then releasing the soil from their trousers in the exercise yard. The men did however, receive assistance from their respective military services back home. One of the most ingenious of the strategies for escape came in the early 1940s from MI9, the British secret service unit responsible for escape and evasion; they hatched a plan with British Toy maker, John Waddington Ltd to develop the game of Monopoly for the imprisoned men. They set up bogus humanitarian organisations to get the games into the camps, but the aim was not to brighten the spirits of the men through this capitalist game, but to hide tools in small boxes within the package. The most important development however, and why Waddington were brought in, was their ability to produce silk maps; these were easy to hide (down boots) and quiet, unlike their paper counterpart. So the game was instrumental in the war effort.

Monopoly has been around for over a hundred years, although it was only licensed as such in 1935 and has been the joy, and frustration of many families across the world since then. It was originally intended to educate people in the iniquities of monopolistic capitalism; but as Catherine Smith’s poem beautifully shows, the competitive nature of capitalism, particularly between a parent and child can overcome any benevolent thoughts. “Almost bankrupt and only recently released from jail,/she owes her ten year old/four hundred quid in rent/….she pleads poverty.” But the boy is unrelenting, “He points out/she could give him Leicester Square,” showing no sign of compassion for his rival’s predicament. “She thinks how/this is what capitalism does to children,/-brutalises them.” So she fights back, “she’ll take her chances,/and hangs onto Leicester Square.” She does this not by rational economic thinking but through human experience; “She likes/the Japanese men with their cameras…/she likes the pigeon shit, the café/ with the gilt-framed photo of the Queen.” And I guess the moral of the story, whether it be to free prisoners or help educate our young, we need to be careful of the multi-headed hydra that capitalism can become, and how “no favours asked” is a rare and touching thing. END_OF_DOCUMENT_TOKEN_TO_BE_REPLACED

Last night I intended going to the Poetry Cafe but life got in the way. It was the second London event of Telltale Press, a poetry collective (this site likes collectives) set up by ‘poetgal’ Robin Houghton. There were some great poets on the card and besides wanting to meet Robin for the first time, I was looking forward to hearing Catherine Smith reading from her new collection, The New Cockaigne. Instead, after doing many other things, my thoughts veered towards that dark, featureless street in the heart of Covent Garden. END_OF_DOCUMENT_TOKEN_TO_BE_REPLACED