This is for those of us still licking our wounds in the fallout from the General Election; at the fact that Labour was seen to have lost because it was too Left wing (I know, don’t you love the media and those that lapdog them); and trying not to think too badly of those who ‘silently’ not only voted Conservative, but twisted the knife with an large overall majority.

Succour has been hard to come by. I migrated to Al Jazeera as I do when domestic news is too, well, domestic, and I felt guilty when perspective was given to me with migrant deaths in the Mediterranean Sea and Indian Ocean, and the continued war in Iraq and Syria, and the Yemen, and the secondary earthquake in Nepal.

But though certain things are relative, there has still been a need to seek solace from friends and networks. I tried to believe in the more nihilistic anarchistic view that it wouldn’t have mattered who got in, but that just made me angrier. Then there were blog posts from the poets Jo Bell, Clare Pollard, and Josephine Corcoran, who bound their anger and hurt in a constructive and humanist approach. And inevitably there have emerged poems in response, from the Stare’s Nest, Well Versed, and the new blog, New Boots and Plantocracies, which I highly recommend.

I have taken my own time to think about how to respond on the site, and I have to admit a defeatist lethargy was still getting the better of me, until I received an email from Fran Lock this morning. I met Fran after the launch of the latest issue of the Poetry Review, where she read some fantastic poems. I gave her my card (yes, got cards now for PP – getting almost corporate), and she contacted me offering some poems she has written in response to the election (poets really are the people that keep on giving). I could have chosen them all but I’m not greedy.

They made me angry, but this time in a positive way because of the language; they articulate my frustrations with Labour, my contained anger at the invisible voters, my uncontained anger at the media (I keep trying to believe we have a free press, but can only see it as free to keep feeding us its elitist bullshit). I decided on two poems, “Decline and Fall”, and “On Guillotines” because she captures all of the actors involved in the democratic farce and even manages to fit in some humour, “Ed’s head like a Pez dispenser, shot/from the neck up and wearing puzzlement/like loss of blood. Cameron, of course,/pinkly inevitable. He pokes through his suit/like a big toe.” END_OF_DOCUMENT_TOKEN_TO_BE_REPLACED

Last night I intended going to the Poetry Cafe but life got in the way. It was the second London event of Telltale Press, a poetry collective (this site likes collectives) set up by ‘poetgal’ Robin Houghton. There were some great poets on the card and besides wanting to meet Robin for the first time, I was looking forward to hearing Catherine Smith reading from her new collection, The New Cockaigne. Instead, after doing many other things, my thoughts veered towards that dark, featureless street in the heart of Covent Garden. END_OF_DOCUMENT_TOKEN_TO_BE_REPLACED

It’s been a great second month for Proletarian Poetry (I would give you the stats but that’s a bit too geeky. I am however, warming my hands over them now).

I have got to know some great poets who have kindly agreed to have their poems featured on the site. As I’ve said before, in terms of working class lives, this is about the poems not the poets; I secretly believe that all poets have written a working class poem, they just don’t know it yet – it’s a class consciousness problem 🙂 Also as I write this, I am reminded how many of the poets I have seen read this month; all are great performers in their own right and way – you really can’t beat live poetry. For example, on Saturday I was at The Shuffle where two featured poets on PP, Inua Ellams and Karen McCarthy Woolf read alongside, Tom Chivers, Holly Corfield Carr, Gale Burns, and Harry Mann. The theme was the environment and there were a great range of poems on the subject.

This month’s poems have covered a number of themes to do with: family, gender, identity, racism, urban life, work and industry, food, and music (got to have the music). There are mothers, fathers, grandparents, butchers, assembly line workers, brass bands, activists, priests, loan sharks, and (to use the title of Inua Ellams’ poem) Lovers, Liars, Conjurers and Thieves. END_OF_DOCUMENT_TOKEN_TO_BE_REPLACED 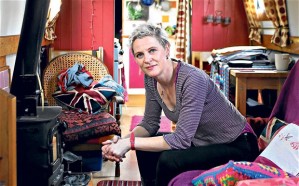 Jo Bell on her canal boat

Jo Bell’s poem for her friend, the poet Tony Walsh (Longfella), is fully aware of the stereotypes associated with perspectives of the ‘muck and brass’ North and the men behind the horns (‘and yes, they’re fat and balding, with beer wet lips/and skin grown pale in club backrooms’). Apparently, one of the reasons favoured by a local owner for setting up the original band in the mid-19th century, was that it would be ‘most likely … a way of keeping his employees from the pub!’ – well it seems that he failed on that count. This reminds me of The North by Paul Summers (‘we..are more than foul-mouthed men in smoky clubs…but not much more’) featured on this site. END_OF_DOCUMENT_TOKEN_TO_BE_REPLACED 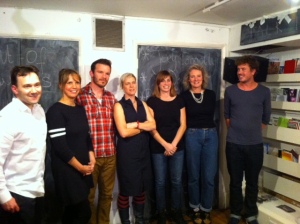 Poets really are a welcoming bunch. Standing at the bar of the Poetry Café last night, I introduced myself to Kim Moore, who like Jo Bell at the Forward Prize, invited me to join her and friends before the readings (I didn’t quite get to the bottom of why Hilda Sheehan ended up in a freezer in Lidl, or was it Aldi?).

I was there for The Shuffle to hear seven poets from ‘out of town’ organised and hosted by Jill Abram. I liked the way Jill introduced the poets by reading a poem for each of them (she meets a lot of people, mainly on residential writing courses as far as I can gather). END_OF_DOCUMENT_TOKEN_TO_BE_REPLACED